Possible translation for the scoring:
NBT - Nice Bikkuri Timing.
Expression (jaw dropping アゴハズレーナ & eye popping メダマトビデーノ).
Going weak/body reaction due to being so shocked 腰抜かし度.
How long they're surprised for ビックリミニッツ ("Bikkuri Minutes").
How well they kept it a secret that it was for candid camera 企画バレてない感 ("Bare" - to be found out).

To signify the end of their attempt they have to scream or shout something.

Google translate from bits of a Japanese TV guide (not meant to be accurate of course but adds some details here and there).
http://tvtopic.goo.ne.jp/program/info/628650/index.html
Tsukitei is not the last challenger this time? Tsukitei: "Last surprise is not enough, isn't it?". Matsumoto is against it ""Do you still go if no people laugh?"".
The location is Shinsaibashi in Osaka, to organise a fake program planning meeting. Target: Toshio Sakata (Actor).
However, there was no reaction at all from Toshio Sakata, even if Tsukitei made a chain of all kinds of surprised faces.

A scary topic comes up, Junji Inagawa goes up as a candidate for the guest, Sakata has actually experienced. A simple opportunity for a surprised face. Tsukitei showed a continuous surprised face then suddenly fell to the table.

Ito ELT challenges in the setting of a gathering with the director, Kakinuma. Concern because Ito continued to barrage Owaza too. Subjected to a staff lecture to suppress. However, to elude that lecture, Ito continued to run away.

[[The rest is pretty hazy though I think it says that Yamasaki (Tsukitei) commented to Toshio Sakata how astonishingly kind he was (ものすごい優しいですね), I think in regard to his unending determination to help him whilst he was collapsed on the table]]

by rocky_iwata
Hosei-san basically chose a beginner level target and he just made funny faces instead of shocked ones.

by Dearka
Thanks for this! But can anyone tell me why Gekidan Hitori face was blurred for the first half of the show??
I have seen random blurring like this before. I know they sometimes do it with product names but why faces?

rocky_iwata wrote:
Hosei-san basically chose a beginner level target and he just made funny faces instead of shocked ones.

I think it says that he was with his target for over 2 and a half hours but he wasn't responding much no matter what he did except the ocassional laugh which seemed to throw Yamasaki off. I guess his target was like "Oh, just Yamasaki doing funny faces like he does" even if they were surprised ones.

Perhaps there were more surprised faces before the random ones before the 2-3 hours were edited down. I think after 2 hours of no responce Yamasaki starts to get confused, there's a moment where he seems to look worried and shaking his head, looking up a few of the Japanese characters in a dictionary I think the text reads "Good grief, no responce at all..." or something (which Endo & others laugh at), I guess he's concerned the lack of reaction won't be entertaining.

Maybe thats why he ended up collapsing on the table to get a reaction (though he was risking losing points for the "don't make it look like it's an act for camera" factor). He didn't seem to expect how his previously un-reacting target would vigorously react to help him though.

Did anyone notice how when Yamasaki tipped his drink and collapsed, he accidentally faceplanted into his glass then decided "Oh that won't be a comfortable position to stay in" so quickly moved it out the way. Not very smooth haha.

At least Downtown didn't rate him with just a turd this time.

Dearka wrote:
Thanks for this! But can anyone tell me why Gekidan Hitori face was blurred for the first half of the show??
I have seen random blurring like this before. I know they sometimes do it with product names but why faces?

I wondered that too... It's really strange.

Makes it look like he was pulling an obscene face or something.

by Hamada DJ
thanks for uploading the video soudou!, I followed the three parties and not stopped laughing mother and mine lol

It war wierd that Gekidan Hitori's face was blurred half the show . haha !

by Ibaraki Dave
Hamada's guide to Vladivostok is featured in this episode. He sits next to Tsukitei Hosei at the restaurant. He looks very different out of his costume, but he is the same guy - Tajima. He's not the target of Hosei's prank, so he doesn't say very much. 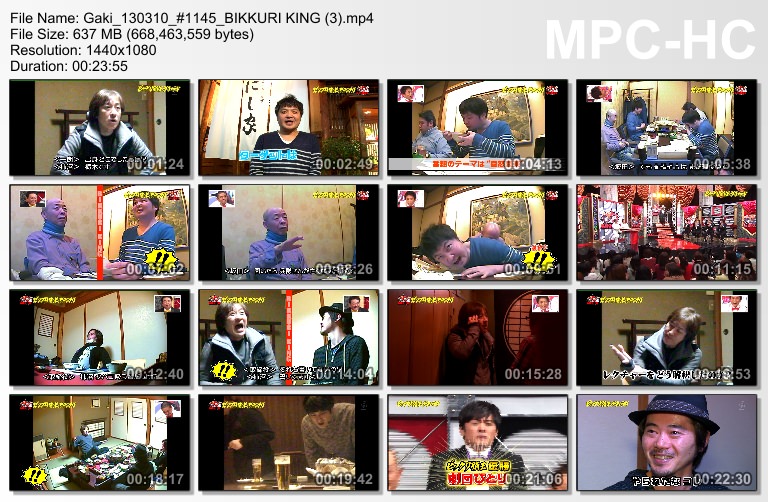